Click on this link to watch the replay of the event: https://bit.ly/2JZ1prQ

Come and join us for the third session of our HiStories series. Bertha von Suttner, A Woman Ahead of Her Time 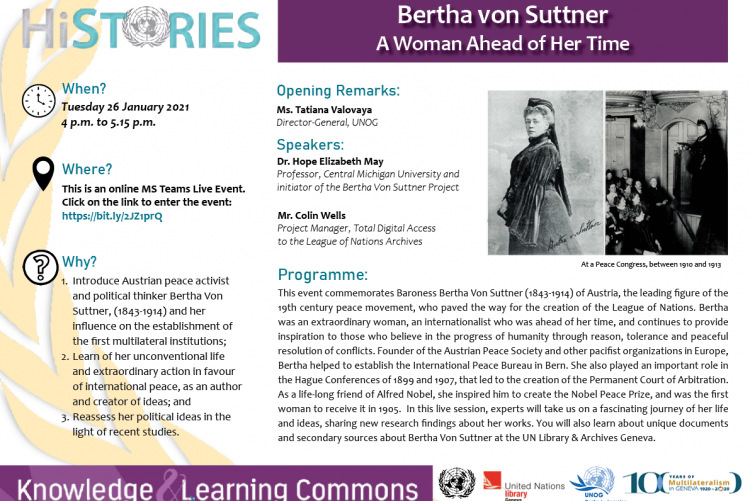 Click on this link to watch the replay of the event: https://bit.ly/2JZ1prQ

1. Introduce Austrian peace activist and political thinker Bertha von Suttner, (1843-1914) and her influence on the establishment of the first multilateral institutions.

2. Learn of her unconventional life and extraordinary action in favour of international peace, as an author and creator of ideas.

3. Reassess her political ideas in the light of recent studies.

This event pays a tribute to Baroness Bertha von Suttner (1843-1914) of Austria, the leading figure of the 19th century peace movements that paved the way for the creation of the League of Nations.

Bertha von Suttner evolved from an aristocratic, conservative background with strong ties to the Austro-Hungarian military into a passionate supporter of peace through law and international institutions.

She described the horrors of war through a woman's eyes in her most famous novel, "Lay down your arms" (1889), that gave her worldwide recognition. Founder of the Austrian Peace Society and other pacifist organizations in Europe, she helped establish the International Peace Bureau in Bern. She played an important role in the Hague Conferences of 1899 and 1907, that led to the creation of the Permanent Court of Arbitration. As a life-long friend of Alfred Nobel, she inspired him to create the Nobel Peace Prize, and was the first woman to receive it in 1905.

The UN Archives Geneva hold the private papers of Bertha von Suttner and of her close collaborator Alfred Fried, as well as those of the International Peace Bureau.

In spite of her many achievements, unthinkable for a woman of her time, Bertha von Suttner has not yet got the recognition she deserves. In today's talk two leading experts will take us on a fascinating discovery of her life and ideas and will share new research findings about her works. You will meet an exceptional woman, an internationalist who was ahead of her time in many ways, and who continues to provide inspiration to those who believe in the progress of humanity through reason, tolerance and peaceful resolution of conflicts.

You will also learn about unique documents and secondary sources about Bertha von Suttner here at the UN Library & Archives Geneva.

All resources are available on this Research Guide on Bertha von Suttner: https://libraryresources.unog.ch/vonsuttner